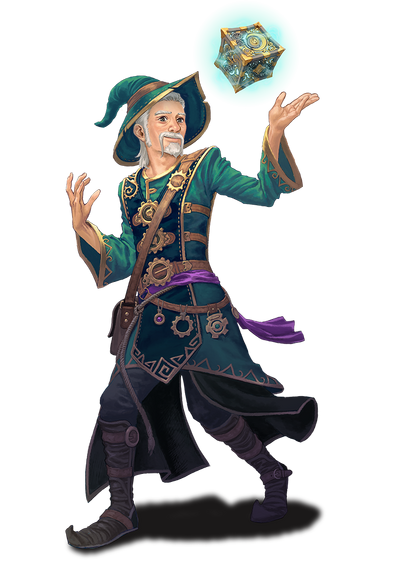 Amadeus is a wizard and hero known from the Trine series. He appears as a playable character in Nine Parchments.

Unlocked by acquiring The Staff of the Artefact and completing sidequest: "Advanced Box Magic"

While the box is no fireball, Amadeus is fond of his long-time companion. The box can be used as a counterweight, a weapon, and sometimes a mild annoyance to adventuring companions.

Amadeus the Wizard is a long-time student of the Astral Academy where many years ago he was abducted by a magical artefact, Trine, in order to save the kingdom from an undead hostile takeover. His companions Pontius the Knight and Zoya the Thief may have helped a little bit there.

Although his gift for boxing is quite unique, he can’t help but feel that he’d make a bit more of a dashing hero if he could wield some fireballs as well. Alas, fire spells have eluded poor Amadeus so far, but perhaps the Astral Academy’s spell parchments going missing may prove to be a fortuitous opportunity.

When he’s not busy being abducted by magical artefacts or searching for fire spells, Amadeus dedicates his time to his family: Margaret the proprietor of Margaret’s Arcane Merchandise, and their three children (all of who can already conjure fireballs.)

"Have you seen a Fireball parchment?"

Amadeus is voiced by Kevin Howarth.